Project description: Claytonia lanceolata is a widespread geophytic herb distributed along the montane corridors from Canada down to Mexico. It is currently viewed by experts as a highly polymorphic and phenotypically plastic species, but our new working hypothesis is that the circumscription of C. lanceolata actually includes several cryptic species, possibly resulting from hybridization and polyploidization during Pleistocene pluvial cycling.

(Above) The Claytonia lanceolata complex in California. In northern California, (A) Claytonia lanceolata Pursh on granite, (B) alternate-leaved and not yet described C. “serpenticola” on ultramafic rocks, and (C) a supposed synonym on greywacke that fits the description of C. obovata Rydb., unsampled in previous phylogenetic studies. In southern California, (D-H) The Claytonia “peirsonii” complex, with (D) subsp. “peirsonii” on granite in the San Gabriel Mountains near the type locality of C. lanceolata var. peirsonii Munz & Jtn. New discoveries in this complex within a species complex include (E) the long-petioled C. “panamintensis” in the Panamint Mountains on dolomite, (F) light pink-flowered C. peirsonii subsp. “yorkii” on volcanic tuff in the southern Sierra Nevada, and two subspecies in the San Bernardino Mountains on (G) grey and (H) white dolomite at Furnace Canyon and Bertha ridge respectively.

Overall Project goals: Assess levels of hybridization and polyploidy to clarify taxonomy in the C. lanceolata species complex, including the use of various molecular, anatomical and cytogenetic tools. Investigate biogeography for the group, including taking a closer look at the florisitic connection between the Transverse Ranges of southern California and the Rocky Mountains to the northeast. 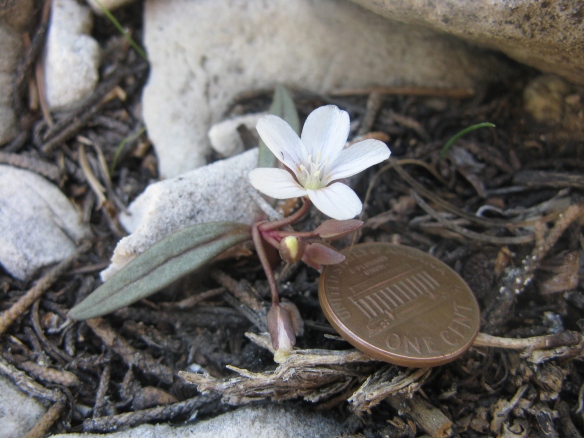 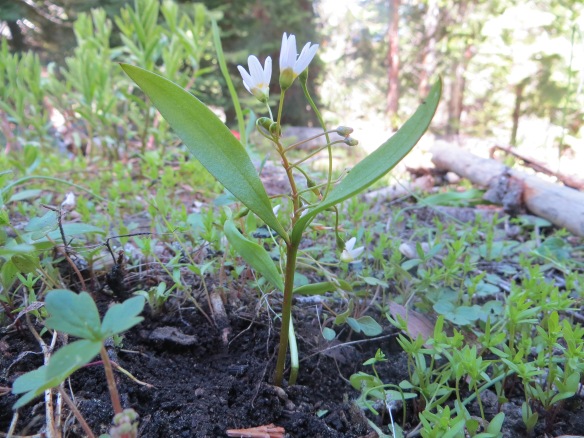 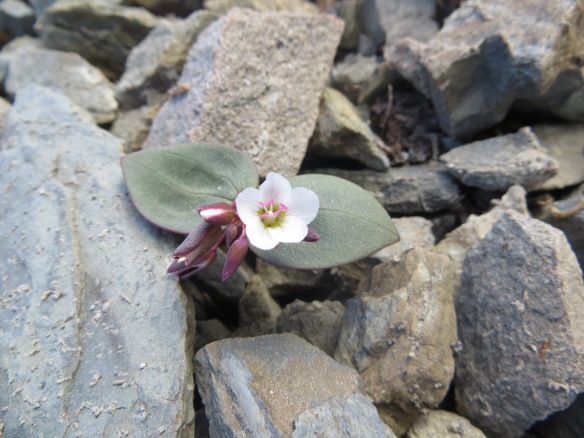 Plants that match the description of Claytonia obovata, a distinctly wide wing-petioled (or appearing sessile) with widely elliptic leaves and inflorescences appearing umbellate. This represents another uncommon member of this species complex (currently treated as C. lanceolata), yet it is strikingly different both ecologically and morphologically from C. lanceolata s.s. plants (shown above on same page). This taxon appears to be quite uncommon, and is putatively restricted to ultramafics, volcanics, carbonates and other unusual substrates distributed from Northern California to Oregon, yet morphological characters and ecological affinities suggest it may be closely related to the southern California C. lanceolata var. peirsonii. Hull Mountain, northern California.

(A) Distribution of Claytonia lanceolata s.l. (B.) ITS Phylogeny developed from preliminary dataset using Bayesian methods. Colors demonstrate non-monophyletic taxa, putatively resulting from hybridization in the group, with the C. lanceolata complex highlighted in red.
notes:

– ITS Phylogeny shows non-monophyly for multiple tuberous perennial Claytonia, and reveals a distinct lineage restricted to ultramafic substrates that falls near the base of a mostly tuberous clade. Fall 2012