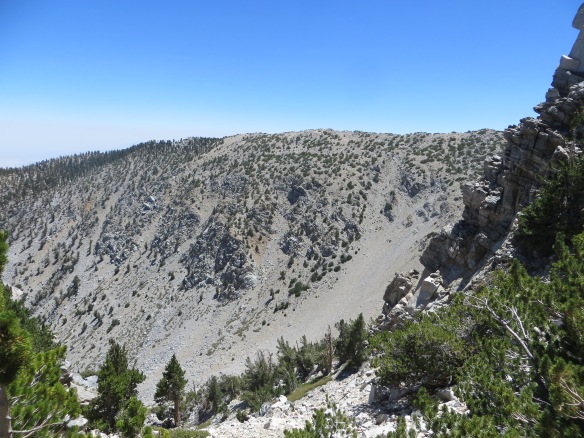 Doesn’t the above (or below) picture look like a fun place to do a plant survey? I thought so… until I did it, that is.

Imagine yourself romping around at 11,000 feet in elevation on a slope as steep as the one in the photo(s) above, searching the nooks and crannies of north-facing cliff faces for a specific plant that grows only in that area, all the while trying not to fall down a snow chute as tumbling rocks move under your every footstep. This is what it takes to call oneself an extreme, alpine botanist, as Marta LeFevre-Levy (USFS San Bernardino National Forest, Big Bear Ranger District) learned last month. “Daredevil Botany,” she called it — I couldn’t have said it better myself.

After all was said and done, we found what we were looking for, and plenty of it! Unfortunately, we were late in the flowering phenology season of Boechera in a drought year, so late that these apomictic plants weren’t flowering; but Boechera peirsonii is distinctive in the San Bernardino Mountains even without flowers. By no means did we search every snow chute across the hillside pictured above, but we surveyed enough to know that if you can get into the right habitat (which, unfortunately, is extremely steep, north-facing cliff and snow chute habitats comprised of primarily metamorphic rock), you’ll find Boechera peirsonii hiding out, almost as common as dirt. Interestingly enough, there isn’t a lot of dirt in this habitat, so you may still want to consider it rare! More extensive surveys should be conducted in the cliffs east of where we found plants by someone with more energy than I, probably younger and more daring, too. 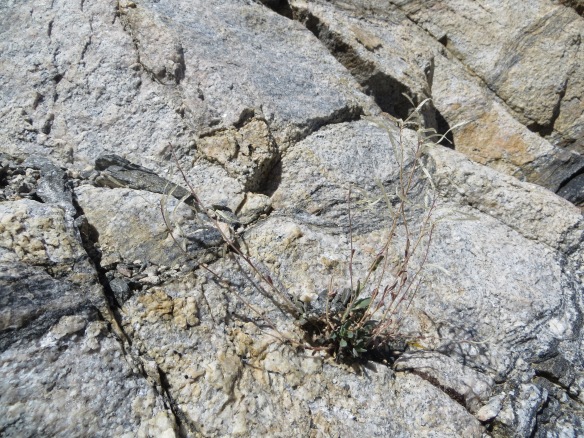 Boechera peirsonii, growing on a cliff face at the head of Whitewater Canyon, just east of ‘The Tarn’ below San Gorgonio Mountain.

Short post, but I wanted to share with everyone that we are making progress on the Conservation Plan for Boechera peirsonii, thanks to monetary support from the California Native Plant Society! Expect a Rancho Santa Ana Botanic Garden Special Publication in 2017.